Thinking outside the box - A fresh look at aquatic beetles 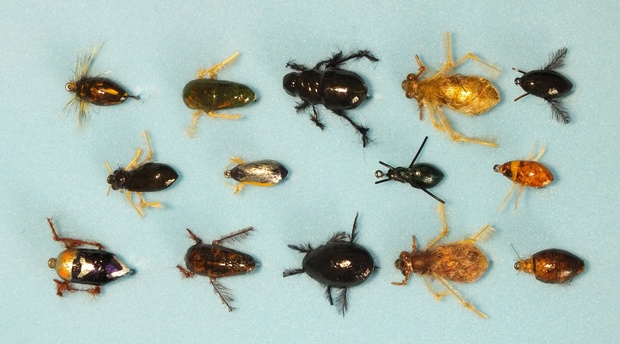 How many times have you been skunked by fish and retreated home with your tail between your legs, conducting a mental postmortem of the day and wondering what you could have done differently?

How many times have you been skunked by fish and retreated home with your tail between your legs, conducting a mental post mortem of the day and wondering what you could have done differently? That for me is the intrigue of the sport — complete fascination that the fish understand and predict insect behaviour. They have to in order to survive, but it is something we know very little about. Challenge accepted Oncorhynchus mykiss and Labeobarbus aeneus!

Here are some interesting thoughts on fly patterns and fishing techniques I have evolved that will hopefully get you thinking next time you are outwitted by fish. The development of a series of aquatic beetles that float but which can be fished on the surface as dry flies or down deep as wet flies has raised a few eyebrows in the fly fishing community. Let me take you on my journey of thinking outside the box.

Having spent a day of complete frustration at the Glen Avon waterfall in Somerset East, where the trout simply refused every dry fly in my box, I took this humiliation very badly. The trout would simply drift in the current below the fly, come up and bump it every now and then, but never take it. My conclusion was that nothing I offered was realistic enough.

How often have you fished a dry fly that is only buoyant for a very short period, drowning too quickly, despite your endeavours with floatants or absorbent patches? All too often when fishing a dry fly, achieving a drag-free drift seems impossible, resulting in an unsuccessful day. Furthermore, as we are driven by conservation and practise catch and release, we seldom keep a fish. Only once in a while when we have hooked a fish deep in the stomach do we take it home and then, upon examining the stomach contents, we suddenly enjoy a light bulb moment when we have evidence of the actual diet of a fish. This evidence shows that a large proportion of the fish’s diet is made up of a variety of aquatic beetles.

My thinking is that dry flies are seen by the fish as terrestrials and are blown onto the surface and are recognised as such by trout or yellowfish.  Seems simple enough.  The fish instinctively expect these goggas to behave in a certain way, and when they don’t, they approach them with sceptism, scrutinising your presentation.  Anything suspicious results in refusal.

Likewise, aquatic beetles and insects whose life cycles occur predominantly in the water have certain behavioural characteristics in the water.  They live in the same environment as the fish, after all, and the fish expect them to behave in a certain way.  For the fly fisherman that means not only that movement in the water is expected by the fish, but also that it needs to be accepted as authentic.  This is the million dollar secret.  When these aquatic beetles or realistic imitations move, the fish are immediately less sceptical.

The “good doctor’s beetle” created by Doctor Hans van Zyl has revolutionised how one can fabricate flies that float with the use of scrap booking materials and techniques using acrylic or craft paints with seal skin to create an extremely realistic, durable and buoyant fly.  With references like Freshwater Life written by Charles Griffiths, Jenny Day and Mike Picker, and Aquatic Invertebrates of South African Rivers by A Gerber and MHM Gabriel confirming the shape, size and colour of the real life goggas we see in our dams and rivers, creating realistic imitations becomes a whole lot easier.  Seeing beautiful photographs of aquatic insects posted on social media by the likes of Wolf Avni also inspires the development of aquatic insects.

The next question is, why go to the trouble of making the floating flies?  Through many hours of observation one can appreciate the haphazard movements of aquatic insects which leads to fishing these flies in tandem, both in the water as a double fly rig and on the surface as a dry and dropper.

Bear in mind that many of these insects come up to the surface to get oxygen, behaviour that’s not viewed as unusual by the fish.

To fish the floating flies one needs to rig one’s leader a little differently to the way you might normally.  I would suggest fishing these flies using a floating line, although you could fish them booby-style on a sinking line.

To fish your floating fly as a wet fly, the length of your leader is determined by the depth you would like to fish.  To make casting easier it is best to have your point fly weighted, as this will also pull the floating fly down so it can be fished as a dropper.  Using a nine foot leader about 2x (ten pounds), add six inches / 15 cm only of 12 pound or 1x, (I use a blood knot to join them) and then add 50cm of 3x (eight pound) as tippet.  The six-inch piece you have built in to your leader is where you will attach your running dropper for the floating fly. (See Figure 1) Remember, your dropper should always be two pounds lighter/less breaking strain than the leader it is running on and should not be longer than six inches.  I have found this reduces the leader tangling because you are casting two flies.

When you retrieve using erratic strips or slow pulls, the weighted point fly comes up and the floating fly also moves up.  As the weighted fly drops, so the floating fly dives, creating the bobbing/darting/diving action that’s typical of water beetles.  The movement of the floating fly dropper runs up and down between the two knots on the six-inch piece of your leader.  Floating dragonfly nymphs are fished very successfully this way.

To create the dry-dropper set up use a nine foot leader and attach your floating fly as the point fly.  Then tie a 50cm piece of two feet of monofilament of the same strength breaking strain as your leader.  You can go lighter if you prefer.  Attach your dropper as a New Zealand rig secured around the bend of the hook of the floating fly.  (See Figure 2)  Your dropper can be a bloodworm, tiny nymph, sunken ant or buzzer depending on what you are imitating.  The relief here is that you do want to twitch your flies every now and again for two reasons – a) to be in touch with your flies and b) because it is normal behaviour for them to show some life.

This set up is forgiving of drag when fishing rivers or when the wind catches your floating line on a stillwater.

Tying these floating flies is very time consuming, but the reward is well worth it as catching two fish at the same time happens quite often.  Essentially it’s something different that works!

This article was published in the SA Flyfishing Magazine, December 2016 edition. To view more of their content, follow this link 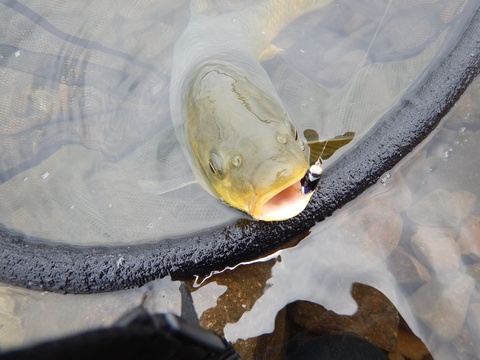 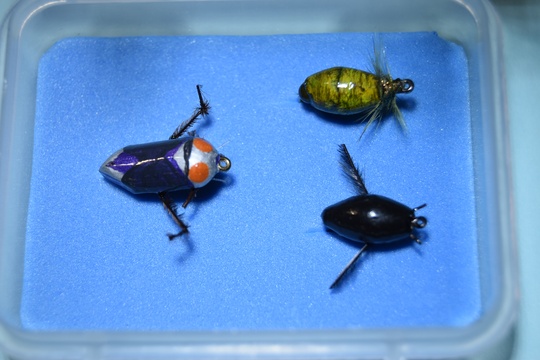 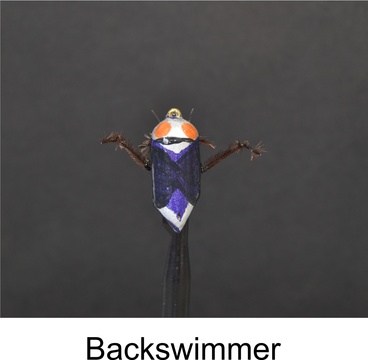 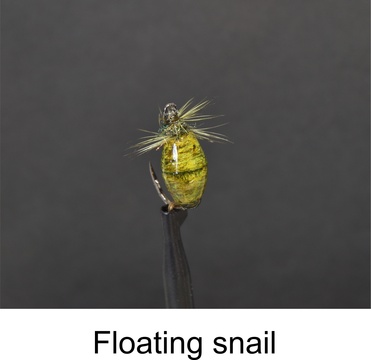 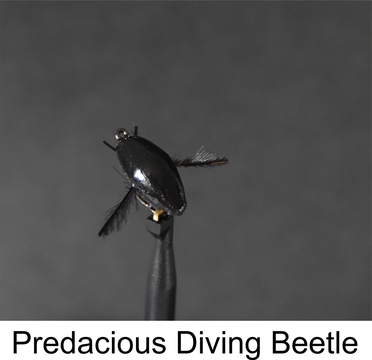 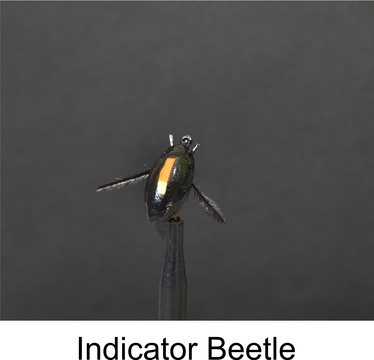 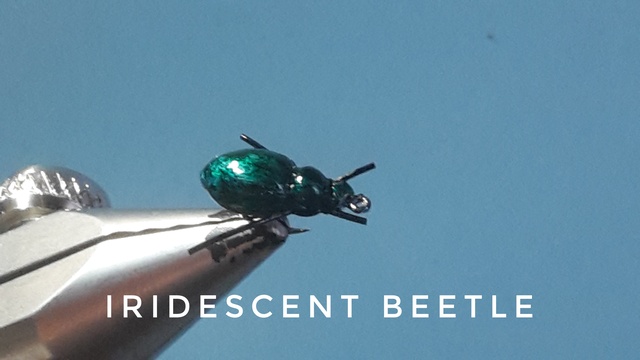 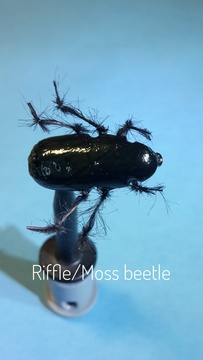 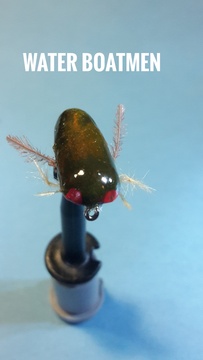 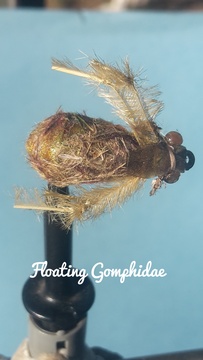 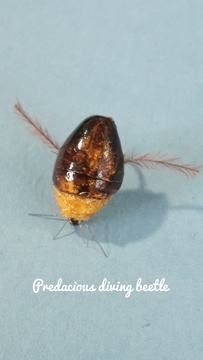 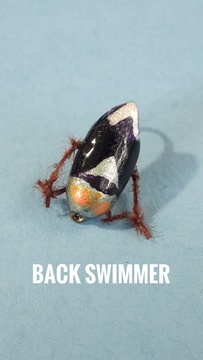 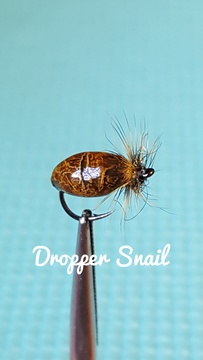 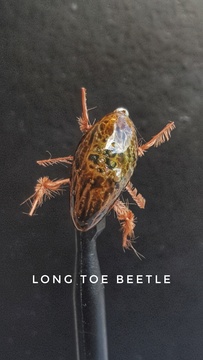