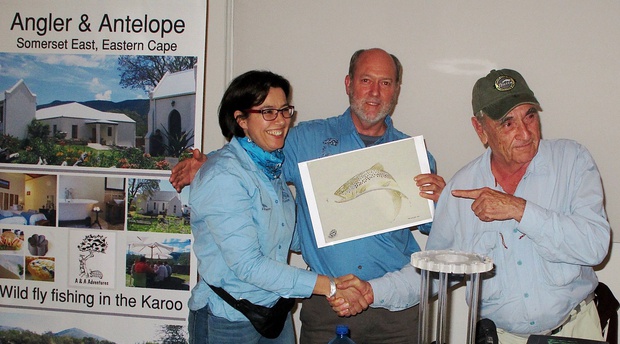 Alan was born in Somerset East and grew up on a farm outside of Pearston in the Eastern Cape Karoo.  He has in depth knowledge of both the area and the wildlife.  Annabelle was a city girl, but has adapted perfectly to the vast open spaces and solitude that is the Karoo.

Together they have developed the Angler and Antelope Guesthouse and have pioneered Wild Fly Fishing in the Karoo.  Alan's flies are also featured at the Catskill Museum in the USA, and is featured in the book "South African Fishing Flies" by Ed Herbst and Peter Brigg.

Their latest venture, A&A Adventures is an opportunity for guests to experience the beautiful surroundings.  Day trips and longer tours can be personalized to your requirements; just talk to them and they will create an unforgettable experience.

"I ended my speech by making a selection - after first clearing it with Gordon - of the participant I thought had made the greatest contribution to freshwater fly fishing in South Africa over the last five years. I gave it to Alan and Annabelle Hobson of the Angler & Antelope along with a modest tinted, pen and ink sketch of a leaping brown trout. It was a popular choice judging from the accolades the announcement received, and they deserve it." Tom Sutcliffe, at the inaugural Fly Tying and Fly Fishing Expo held in Somerset West in 2016.

Peter Brigg - Call of the Stream