Posted by Annabelle on Sat October 29, 2016 in Fly Fishing for trout. 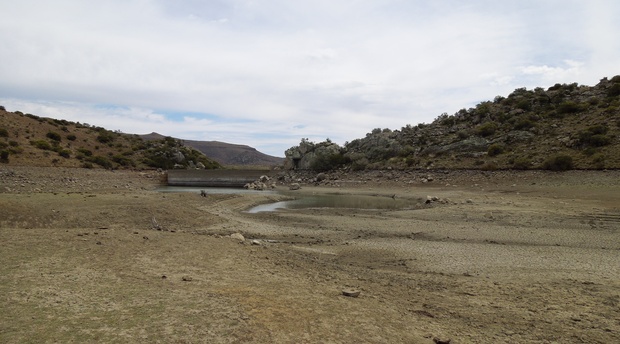 This last weekend, we decided to mount a rescue mission. With the drought that is gripping South Africa, the rains have been very patchy, with some areas receiving just enough rain to keep the dams filled, but others receiving little if no rain. The Bankberg Troutfishers Club trophy water in the Cradock area unfortunately falls within one of the unlucky areas. So, last weekend, we decided to try to rescue as many fish as possible.

Four vehicles in convoy, 9 of us went off to Cradock to try to catch as many fish as we could, and relocate them to a dam closer to Somerset East, where the rain had fallen, just a little.  We were worried, the farmer said that the dam was just a puddle of water, and we could get there, and it would be literally just a puddle of mud with all our fish dead.  Fortunately, the farmer has been very considerate with his management of what little water he has, and there was enough of a puddle to keep the fish alive. 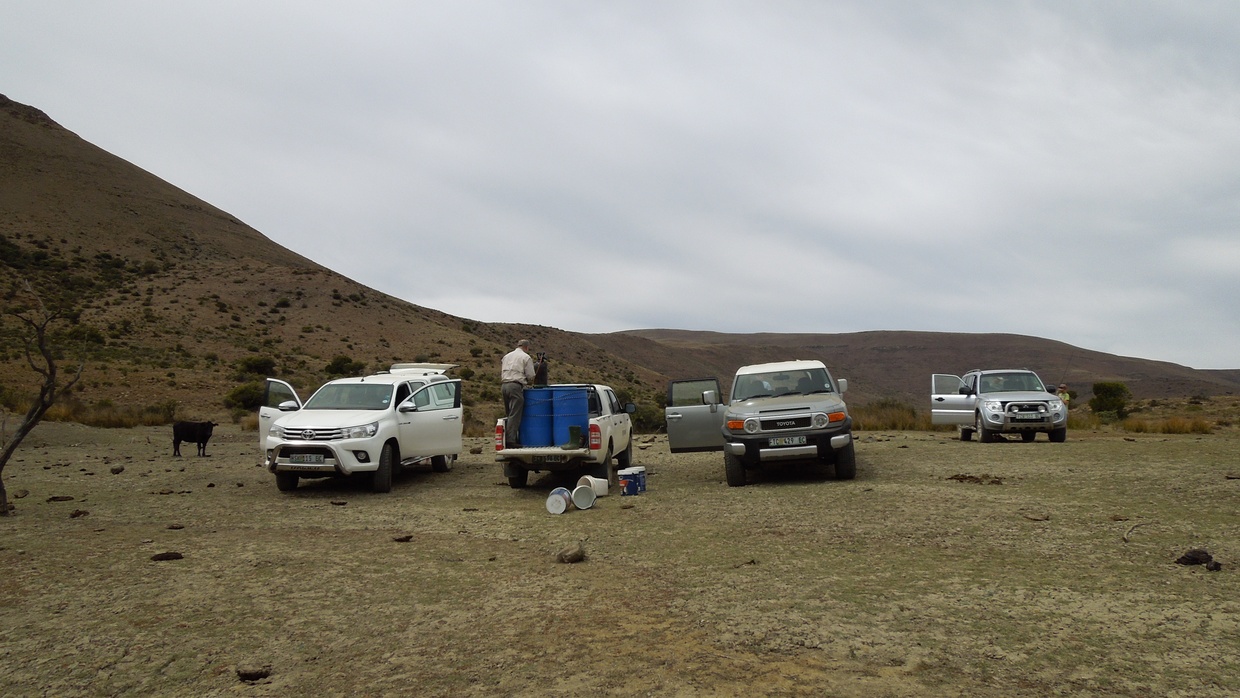 Before the fishing could start, everyone had to tuck in and help fill the 200L drums so that all would be ready when the fish were caught, and we could keep the babies alive for transportation.  We’d literally just finished filling the drums, and got to our tackle ready, when we saw Eric walking back to the bakkie with his bucket.  The first fish, already! 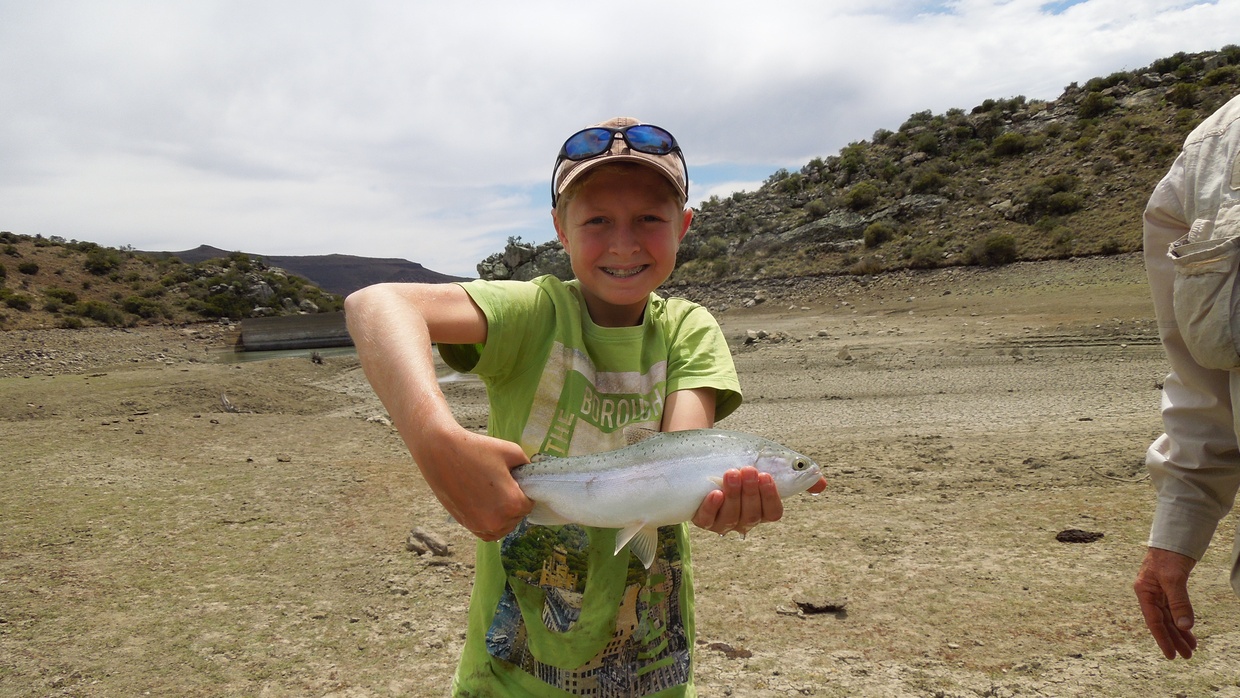 We hoped that this would be the indication that it would be a very productive day.  The fish were relatively co-operative, but if you thought that it was easy to catch trout, just because there is less water and still the same number of fish, you were mistaken.  They don’t survive by being stupid.  Almost everyone managed to catch a fish, I think if Peter wasn’t running around helping everyone else net and move their fish, he would also have been rewarded with a feisty trout. But alas, the point was not so much catching just for the fun of it, but catching so that we could save some of the trout before the water dried up completely.  By 4 pm the South-Easter had come up and the fish had gone down, so we called it a day and started the trek back to Somerset East with 13 fish in tow.

Now bear in mind that the oxygen had been pumping into the drums for a good 5 hours, but we had enough to keep the fish alive until we got home.  Murphy…always has to have the last say… The bumpy dirt road from the dam to the tar just outside Cradock, caused the regulator to move just a tad and super-oxygenate the water, and just before we got to the end of the dirt road, we had a flat tyre.  With half an hour wasted changing the tyre (don’t even ask about the broken lever of the jack!) we now had to rush to get to Somerset East before the oxygen ran out.

Just a little bit faster than usual, we managed to get to the dam with at least some oxygen left in the tank, and, in darkness, transferred 12 happy trout into their new home.  Unfortunately, with these rescue missions, you don’t always have a 100% success rate, but only one pan sized trout didn't make it.  I rate that as a very successful mission! 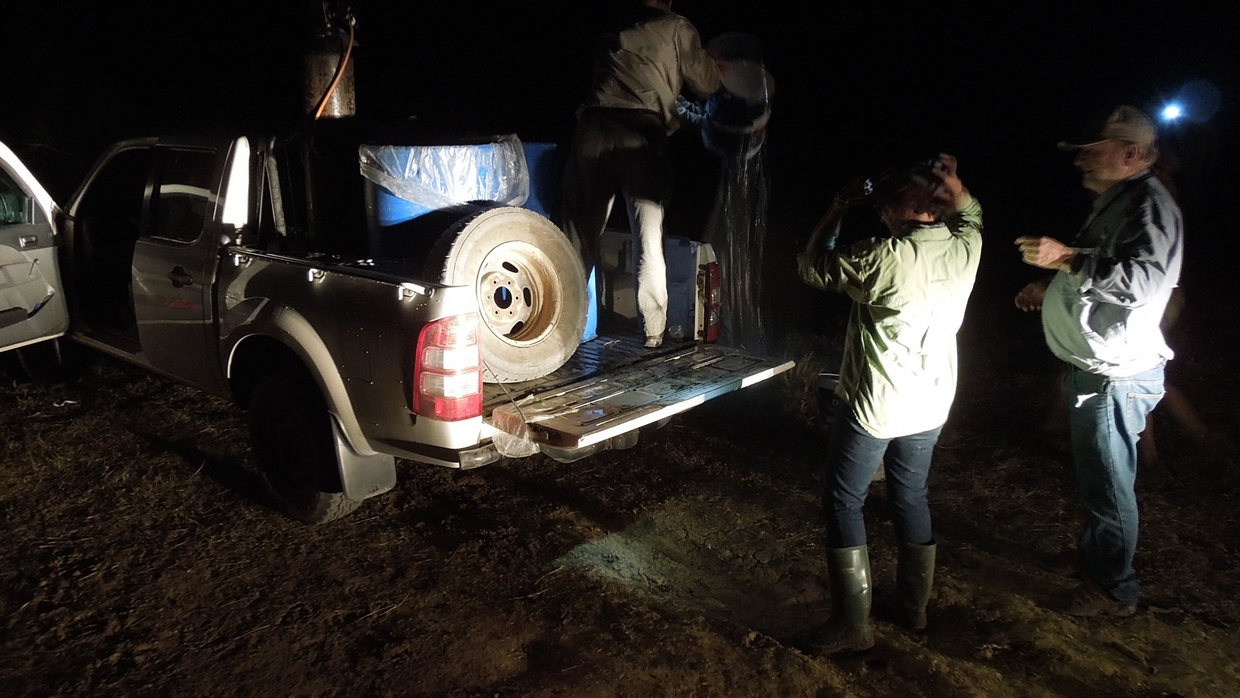 It was a great day, and with wonderful people to help, it was just so incredibly rewarding to know that you’ve rescued some of the trout from a muddy pool in the middle of the Karoo.