Posted by Alan on Tue February 3, 2015 in Fly Fishing for trout. 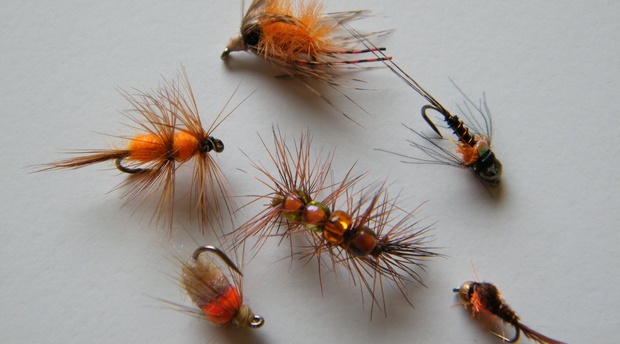 Spring usually announces the start of the swimming season, together with images of long, warm lazy days basking in the sun. It also brings life-giving rain and the opening of many trout waters. As the days become hotter and Mother earth warms up to the idea of summer, so too does the aquatic life in our fly fishing waters.

The insect menu for trout strongly features the Order Coleoptera, water beetles, diving beetles, whirligigs and the Order Hemiptera; true bugs that include water boatmen and backswimmers. The psyche of the fly fisher man also changes, much like a chameleon, as one now moves from the comfort of your fire place and fly tying
vice, to the window of the great outdoors. So how do we cope with beetle mania to become more successful fly fishermen?

Beetles tend to dart around haphazardly, often tumbling through the water. That is exactly how one should retrieve. By designing an all-purpose beetle pattern, the common thread amongst beetles is not only their movement, but also their colouring. They tend to have common colouring; purple blue as the bulk of their body and a very strong representation of yellow either at the head, tail or on their flanks. Some of these beetles also have well developed legs for swimming. Our attractor fly pattern features all of these characteristics and we have added a tungsten bead at the head of the fly, as well as a variegated marabou tail to accentuate its movement. There are many commercial patterns available that are general imitations of water beetles, such as very small woolly buggers, marabou nymphs, Coch-y-Bundu, Black and Partridge, Corixia, water boatmen, woolly worms and so on. It is all in the retrieve, so the trick is to execute short, sharp controlled jerks, almost like the art lure fishermen do when jigging. These jerks create a bobbing movement that simulates the beetle tumbling, the weight of the tungsten bead darts upwards as you execute your jerky retrieve and then falls
down quickly as you release, with the marabou tail waving vigorously. Aquatic beetles tend to hover in and around weed beds, as they offer both food and protection and this is exactly where you should be plying your trade. The added bonus of fishing beetle imitations is that they are found occupying all levels of the water column, so you don’t have to spend hours prospecting to find out what depth the fish are feeding at.

The dynamics of nature seem to be greater during summer, as the temperature range is greater, with cool mornings building up to a sweltering midday and the evenings usually being soothed by a cool breeze. This tends to provide more changes, thus layering the water columns, which is why it’s important that you retrieve your fly through a variety of depths. The fish find the layer in which insects are trapped or moving through, which means that there might not be any visual surface activity, but rather frenetic feeding taking place in the layers below. Often a light breeze will suddenly stir up from nowhere and a successful tactic is to position
yourself facing directly into the wind and then cast your floating line into the wind using a nine to 12 foot leader.

Most anglers have a mental block when casting into the wind. The trick is not to force the cast, as the harder you try the worse it gets. Use your rod to deliver the line into the wind by changing the plane of your cast from horizontal to downwards on the forward cast and upwards on the back cast. Effectively you are presenting the line just above the water in front of you and downwards, where the effects of the wind are minimal, and at 45 degrees upwards behind you. By doing this you use the wind to keep the line up in the air behind you on the back cast and the flex in the rod to punch the line cutting into the wind on the forward cast, without slapping the water in front of you. The secret is to only release the line on the forward cast when the line has forward momentum and is almost fully extended, that way it cuts into the wind.

Daphnia, commonly known as water fleas, drift in clouds between the water columns. Often a good idea is to have a bead head beetle imitation as your point fly and position a Daphnia fly pattern as a dropper about four feet above the point fly. As all of these insects rise and fall thr ough the water columns, using one increases your odds of having a successful day. By presenting your menu into the wind using a floating line, the wind pushes your flies in a natural way straight back to you.

The take is usually quite vigorous so it is critical that you are always in touch with your fly, otherwise the take will simply pick up the slack for you and you won’t set the hook. Tight lines!