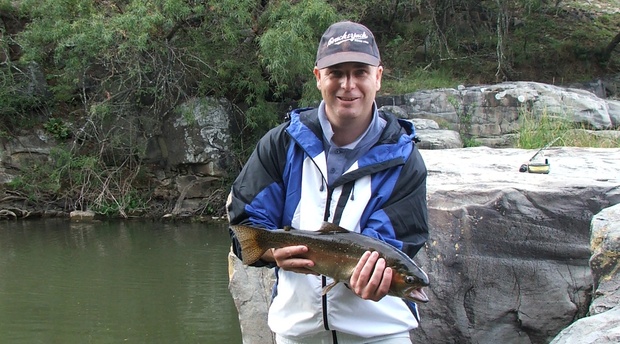 The reason we fly fish is to catch fish ... or is it? When you hook a fish it is undeniably an adrenalin rush, and that’s the sport or fun of it.

The exhilaration of several emotions takes you on a rollercoaster ride during the time it takes you to land the fish. A huge dollop of success soon melts into panic as pisces and angler grapple for dominance, physically and mentally. The scale is tipped in our favour physically as we have the benefit of science in the construction of our equipment, but the fish has home-ground advantage. We expose the nerve ends of our character as we question our abilities, whilst the fish is hell-bent on survival. Once we’ve sized each other up, there is the calm before the storm; the angler composes himself whilst figuring out how to land the fish, and the fish offers its last resistance. Your sense of being and achievement are immeasurably gratifying when you see the fish, tail frantically waving, before it disappears into the safety of the deep. You often hear fly fisherman say that a catch is a bonus as it’s actually the day’s outing that soothes the soul. Undoubtedly it’s a combination of both, for one needs fuel to keep the passion burning.

In the modern day and age where bigger, better and faster appear to be the criteria for judging success, this is not the case with fly fishing. The therapy of participation is to expose patience and tenacity, and engage one mentally by becoming one with Mother Nature. Only by feeling the pulse of all her elements does one
ultimately connect. The anomaly of man is that connection for each of us is unique, both in experience and meaning.

It is this allure that saw Rob, Geoff and I heading for the mountainous pools at the source of the Little Fish River, which holds monster trout in the Karoo. The excited chatter as we passed through the Swaershoek Pass was stimulated by the contrasting terrain, variety of game and habitat of the kudu. As we pulled off the gravel road and parked next to a concrete causeway, Geoff sceptically asked if this was the river we are going to fish. He was looking at a maze of thorn trees that revealed only the smallest trickle of water from the Little Fish River. After tugging on waders over our breathable clothing, lacing our boots and lining up the eyes of our rods, we gathered our rucksacks and marched single file in silence to the edge of the thorn trees. Getting through this barbed barrier unscathed required a fair amount of skill as we weaved torso and fly rods under, between and through the thorns.

Finally free and on the move again I suddenly froze, eyes focused intently on a bold paw print in the path in front of me. “What’s that?” asked Rob huskily. “It looks like the spoor of a huge lynx,” I whispered. “Nonsense,” barked Geoff, “it looks like a leopard spoor.” After much debate about the possibility of leopard in the area, we eventually shrugged off the idea as unlikely. On edge, we continued walking downstream, stopping every time we heard a noise or scuffle in the bush; needless to say our conversation dried up, much like the river bed.

Soon after we heard the gurgling of water as a bank of rocks burst out between the thorn trees. I dismounted my rucksack, which holds some 1,500 fly patterns, and explained that the trout were stocked annually in the pool to sustain a succession of fish. The pool was no more than twenty-five square metres in size. After planning our assault, we set up our leaders. Geoff and I took cover next to a Willow tree that languidly lay at the edge of the pool and as there was only place for one person to fish, Geoff had the first session. Rob then leopard crawled his way, gear and all, to the opposite side of the pool.

Geoff false cast over the rocks until he had sufficient line out to present his fly into the throat of bubbling white water, coming from a small waterfall that cascaded over a rocky ledge. By casting over the rocks and not the water, he wouldn’t spook the fish quite as easily. The trick was to have enough slack in the line to allow the current to churn the fly, letting it sink to the bottom before being washed to the edge, just as a natural insect would be. Where there’s bubbles and foam, there’s usually trapped insects, and where the current and slack water meet is the prime lie that holds fish. With Rob in position at the tail of the pool, he cast up into the waterfall’s throat, whilst staying in touch with his fly as it washed back towards him. Both Geoff and Rob used a strike indicator to gauge the depth and flow of the water, which helped them to manage the slack in the line and see the take.

At the end of the day, the session belonged to Geoff who landed two absolute beauties, both over 55cm and weighing in excess of 2,5kg. When you consider the pool’s location and that it’s stocked annually with 30 fish ranging from 10-gramme growers to yearling trout, of which maybe five grow to trophy size in their  lifespan, it was indeed an exhilarating afternoon that produced quality fly fishing. Although Rob and I didn’t catch anything, we enjoyed the outing as much as Geoff.

We are fortunate to experience many things in our lifetime, but the chronicles of certain experiences, such as this one, remain etched in our minds as clearly as the day it happened.

Published in Do it Now